Did you believe that a girl who became a real lady after treated by a man decide to walk away from him? Play Pygmalion, writer George Bernard Shaw: The Flower Girl (Eliza) is an uneducated lady she was selling follower at the street. She found an important opportunity to improve her English and become a real lady during a bet between The NoteTaker (Higgins) and Pickering. Her internal characteristic changes as well as external characteristic throughout the play after training with The Note Taker (Higgins).

Eliza is a main character in the play. Her self-confidence was changed through out of the play with her first life, she depends on Higgins and Pickering later on Eliza confidence enough to start her new life and depend on herself. It clear that at the beginning of Act 1 Eliza lacks of self-confidence when Higgins was taking a note about herself, she felts scared because she thinks that Higgins will do something with that information. Eliza said, “Then what did you take down my words for?” she talks to Higgins with scares. The quote means Eliza asking Higgins about that information he has taken with fear. This shows that Eliza doesn’t have enough confidence to tell Higgins to stop taking information about herself. Eliza is a poor girl she scares to talk with people who from a higher class like Higgins.

From Act 1 to the end of the play her self-confidence still, change throughout of the play the level confidence getting higher and higher. Her self-confidence was changing because she knows how to use a small talk and after learning with Higgins for a long time and she becomes a real lady also she decides to walk away from him without having anyone job to work. After Eliza becomes a real lady she said, “How do you do, Professor Higgins? Are you quite well?” Eliza asks. The quote means that Eliza surprises Higgins and Pickering with having a small talk with them and she act like a real lady. This demonstrates that she knew how to use a proper talk with Higgins and Pickering and also teasing them. Also, she shows her own ability to Higgins and Pickering what she got from them. From the start of the play to the end of the play the level of confidence of Eliza getting higher and higher after having a non-freedom life and full of bullying and treated badly by Higgins.

Eliza internal changes as well as external throughout the play after training with Higgins. At first, Eliza was selling flower at the street and there was a NoteTaker named Higgins taking information about Eliza . At the beginning of Act 1, she doesn’t have enough confidence to talk to Higgins who from a higher class. She decided to walk away from Higgins because of bullying and treated badly to her. 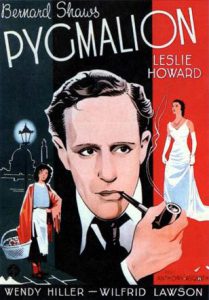