On Friday, March 2, 2018, my exploration, HIV/AIDS in Cambodia, went to visit a place called New Hope For Cambodian Children. There were around 200 kids that is currently live in the orphanage, and they are all HIV-positive. Before I met the kids, I thought that they were skinny, sad, and careless; it blew my mind when I went to the place because they were healthy, happy, and lovely kids. The place was a really needed area for those who are HIV-positive because discrimination was forbidden and support was also given. For those students, their level of English was high enough that they could easily communicate with the foreigners. Moreover, I was amazed by the director of the orphanage when she told us that the kids had their own garden. When the crops were harvested, the kids sold it to a stranger because she gave them a better price. Furthermore, I was so upset when I had lunch with them because they thought that I would discriminate against them, but I only wanted to make friend with them. Even though they didn’t talk to me during lunch but I talked to them a lot during our friendly football game. 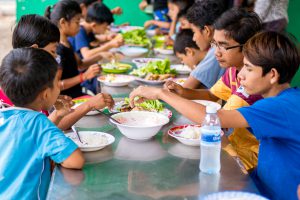