In order for Superman to fly he needs to have a thrust force that equals his drag force. According to the Flight Mechanic, “Thrust is the forward force produced by the power plant that overcomes the force of drag.” The drag force is a force that acts in the opposite direction of the moving object through a fluid or gas. Moreover, in order for the Superman to balance himself when he moves up, down, right, or left his lift force needs to equal to his weight. “Lift is the force that directly opposes the weight of an object and holds the object in the air.” How does he overcome drag force? There is a speculative theory that actually being studied by some scientists. One of the theories is that gravity is carried by subatomic particles (particles much smaller than atoms) that are called gravitons. Scientists have not know is graviton do exist in our world or not, but they believe that gravitons travel in the wave as much as the light wave or electromagnetic wave. Therefore, if Superman has a way of generating gravitons within his own body, which means he could travel or fly close to the speed of the light by riding on the wave of gravity. Moreover, he could also create attractive force, and all matters on earth have a gravitational connection between them all. So, he could fly toward something by making a very strong gravitational pull towards it by sending a lot of gravitons to it. Even though this is just a theoretical concept, but scientists still continue to find the real explanation behind gravitons; gravitons might also be the clue for scientists or physicist to do a further investigation toward the concept of the flying human. In the other side, Superman was born on a massive planet called Krypton, a much larger planet compared to Earth. According to the comic, the Krypton’s dense core is unstable and about to explode so that they came up with a decision and sent Superman to our Earth. On earth, he would be the strongest human due to power that he has on earth, which is the power that he did not have back in Krypton. Moreover, Krypton is where its gravity is greater than our earth’s gravity, therefore he grew up to be stronger than normal human being. For example, if we someone that weighs 400 pounds on earth and we put them on the moon which has ⅙ of the Earth’s gravity, they would weigh around 67 pounds on the moon. Due to the gravity of the moon is less than our Earth, they would jump at a greater distance than they could jump on Earth. Same as Superman, if he came from a planet that has a higher gravitational force than earth, which means that his weight would be less on Earth so that it is easy for him to leap or fly between buildings. Moreover, if he were to lift a cup back in Krypton is would be as easy as lifting a car on earth due to the difference of the gravity. Clearly, both of the above theories are understandable, but the only thing that scientists need explain is to prove the concept of gravitons and the planet of Krypton. If gravitons do exist in our world, it is possible for the human to fly because we can somehow generate our gravitons so we could overcome the drag force and able to lift ourselves up. 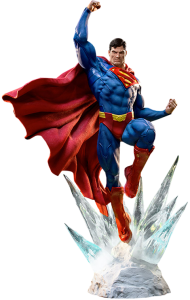