Growing up as the oldest child in a family is a hard thing to do. A lot of people think it’s all difficulties and work for the oldest child; in fact, most people believe that they often don’t get what they want, they can’t get away with anything, and they always get in trouble. Although it’s complicated, I still find it unique to be born as the oldest child in the family. My journey being the oldest child was quite different from other children. I did not receive enough love from my parents when I was young, and I was treated differently from my siblings. There was no true definition of happiness for me and nobody knew how I felt to be the oldest.

As the oldest, it was difficult to get my parents to spend time with me. Instead, I would hear things like: “spend your time wisely, I need to feed your younger brothers or I need time with your brothers.” It was tremendously hard for me to cope with the situation because I was not too far ahead of my brothers’ age during that time. I was still a kid who needed time to stay close to my parents. My youngest brother is six years younger than I am, and my other younger brother is only three years apart from me…that did not make my parents wanted to spend much time with me. I had a lot of moments with my parents when I was younger, and they were remarkable times. But one thing that separated us apart was when I began elementary school. The transience of my happiness began to fade away.

Things got worse. I needed to wake up early every single morning to get myself ready for school, and came back home every late afternoon. The only time I met my parents was night time, but still, we did not talk to each other much. I felt parentless as a young child. I was not able to express my feelings toward them because I was not confident enough to spit it out. I would spend time with my brothers whenever I felt lonely because they were super adorable when they were young, and I loved to tease them so much. However, there were moments when I made my youngest brother cry, and they stared directly at me with their aggressive and angry expressions on their faces. It hurt me even more and it made my relationship with my parents became more fragile.

Even though I was raised differently from my younger brothers, I’m so privileged to be born as the oldest child in my family. Being the oldest is hard but throughout this unique experience, it silently taught and trained me to live independently. I was brave enough to ask my parents about my childhood, and I was surprised by their answers. My parents planned and raised me intentionally differently from my brothers because they wanted to teach me self-sufficient-life-lesson. I was always thinking negatively towards my parents as I grew older. However, by knowing the truth about the way my parents treated me, I couldn’t love them more!

Helping my country is always at the top of my mind. Currently, I’m a part of this project called KhmerSight, which we work closely with a foundation to bring back eyesight for many Cambodian people. We would go down to different communities with the KhmerSight foundation staff to deliver free eye testing. The foundation also helps give the opportunity to those who couldn’t afford to get their eyes fixed with free surgery. Seeing people get their eyesight back means a lot to me, and I will continue to be a part of this project.

Here are some of the pictures of what we have accomplished at the community. 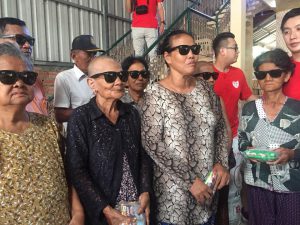 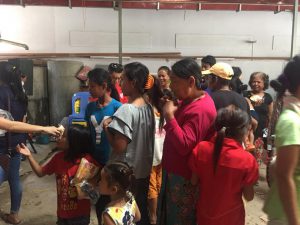 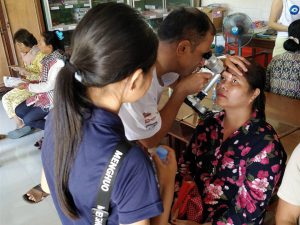 I’ve never been comfortable speaking in public. It made me worried whenever my teachers appointed me to talk to strangers. It even made me nervous whenever my parents persuaded me to converse with any of my relatives that I’ve never met before. I liked being shy and quiet because I was an introverted person.

I never wanted to leave my comfort zone. I always tried to avoid publicity, I can always be found somewhere else on the side, at the corner of the classroom, and at the back of the desks. I did not want to attract too much attention to strangers. Thus, I preferred solitude.

But, that is not who I am now. I hated being who I was, and I was tired of hiding myself from this interactive world. I always dreamt of escaping the silence, and last year, I finally did it. It all started in a debate class.

Defeated by the other team during my debate class over the topic I fascinated was a nightmare; I was not satisfied. I felt despondent after the debate because I did not participate as much as I wanted. I had a multitude of ideas in my brain, but bashfulness prevented me from speaking. There were moments where I was not able to articulate my ideas because I was scared that they were all wrong.

What happened? I was not completely an introvert.  That momentous loss changed everything. I started to occasionally talk to my debate teacher for tips and I began to participate more in later debates.  Boldness was now part of my new character, and it was at that moment when I betrayed my old self to stand up and speak with confidence during the next debate.  I identified something different and I found it exhilarating to speak in front of people.  It was not the end. There were moments in that specific debate where I forced myself to ask the opposing team various relevant questions, which I did, and even defended my team from them with heroism.

If I had succeeded rather than failed, I would have changed and learned nothing. I spoke up because I wanted to change.  There is no shame in trying to change, but there is shame in never trying.

I chose and made many more incredible changes in my life. By my innate challenges [the old shy me] I already understood the disadvantages of not speaking in public. It trapped my voice and prevented me from speaking to the world. I was not able to make friends. Then, right after I had overcome this immense setback, I began to discover something about myself: I had a talent. A talent that defined the real me.  A talent that motivated me to express my own words. A talent that assisted me in making new friends. I was able to manipulate this talent in any conversation.

At the end of the debate class, I became the person that I wanted to be. I started to discover my own voice. The voice that is important for who I am, the voice that I always wished and asked for. I had won my personal challenge, however, without realizing this obstacle, I would still be the old me that never wanted my voice to be heard by the world. Most importantly, the whole transformation taught me to see the importance of reaching my potential. I hope, through this careful open-mindedness to change, that I can continue to make many more adaptations throughout my life.

Literacy is a really tough class for me to handle since it’s an ESL to me. I’ve been working on improving many skills: writing, speaking (fluency), and other skills that are relevant to literacy. I perpetually use many online resources to develop these skills, and it encompasses Khan Academy, Newsela, and other free available sites.

A few weeks ago, I was given an assignment by my literature teacher to write a short poem, and mine was about the Christchurch mosque shootings in New Zealand.

Besides the poem, I love to read news about world current events and science articles. Newsela has everything, I really enjoy reading its articles since it comes with different reading levels; I can pick a level that’s reasonable for me, and it has various quizzes that I can do to reflect on my reading. It also comes with many other awesome functions and activities.

We also use Commonlit for reading and answering questions.

I also use this site to develop my vocabulary skill.

A few months ago, I had an opportunity to listen to a former Aerospace engineer from Boeing to talk about his experiences in the field of spacecraft design. Even though he was a retired space engineer, his knowledge about spacecraft was still exemplary and I learned and understood so much information from his phenomenal presentation. He then introduced us to CubeSat: a small satellite with the dimension of 10 by 10 centimeters that can do various missions in space. I was so interested in the topic and couldn’t stop thinking about it at all. His speech inspired the Academy and us to form up a team, of five students, called LigerSat with an immense mission to create the first Cambodia CubeSat and send it to space-I’m also one of the team members. Our team initiated the project without knowing what to do, and we were completely struggled at first. Later on, we got connected with mentors and worked closely with them to understand more about CubeSat.

It was tough for us to keep up with our work since Cambodia has not yet introduced to the space industry. We decided to check for international conferences so that we can connect with more space-related experts. There was a Nano-Satellite conference hosted in China, we worked so hard to persuade the Academy director; our request got accepted and our team went to the conference and got connected with many experts.

I’ve been interested in space for so long, and this project had delivered me the opportunity to experience my passion. I and my teammates wanted to become the pioneer of Cambodia first space program. Even though the project is vast, we will painstakingly collaborate as a team to make this project become reality before our graduation in 2020. 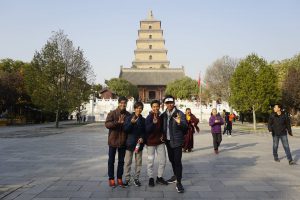 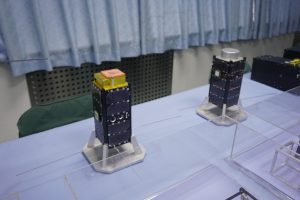