On Friday, February 02, 2018 my team and I went to Thailand, and it was my first time to travel abroad. The flight was amazing because I got to see the view from the top and able to travel above the beautiful cloud. Our first dinner, at Thailand, was the spiciest noodle that I ever ate in my entire life.

On the next day, we went to the NIST international school to get ready for the upcoming competition. Right before the competition started, we had a problem that was completely devastated our destination. The robot and the joystick (remote control) was not able to connect to each other.

After our first match, we figured out another immense problem. The motors were stalling so that it does not have the ability to create any movement; the competition was the game of alliance, The Judge will randomly pick us a companion (a team), and we did terribly on the first three games because our alliances were having a difficulty with their robots.

Then, we decided to modify our entire design, and we were so frustrated because we missed our fourth game. We performed so well in our last game, and the ranked 4 team immediately invited us to be their allies. For the last three games, our average points were somewhere around fifty-five.

Sadly, our alliance had a problem with their robot so that they did not make any point. Even though we did not win first place, but it was an enormous jump for us to move from the 17th place to 3rd place. 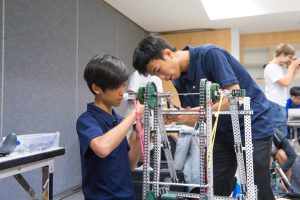